Screenwriter Garner Simmons shares the twists and turns of his Hollywood writing career.

With “writing in the blood”, Garner tells his unique story of breaking into show business while working on his PhD by writing the definitive biography of legendary movie director Sam Peckinpah. 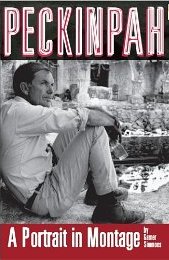 Using his critically-acclaimed book Peckinpah: A Portrait in Montage as his calling card, Garner began climbing the rungs of the Hollywood career ladder by following his personal mantra: “keep writing”.

Simmons reveals how winning a studio screenplay contest first brought him to the attention of mega-agents and gave him the courage to leave Chicago for Hollywood…only to discover that Hollywood agents don’t always deliver on their promises.

Once he was in Hollywood and hearing the frequent advice “to forget this business and go back home” Garner did what he does best: he kept writing. You’ll hear his story of unmatched “chutzpah”, determination, and the work ethic that helped him create his own “breaks”. 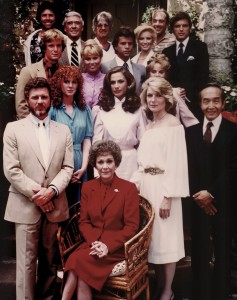 The cast of “Falcon Crest”

Garner talks about working as Story Editor in the early seasons of Falcon Crest, and the credits that quickly followed as writer, story consultant, and producer on shows like Yellow Rose, “V”, Spenser for Hire, Buck James, and Poltergeist.

As a writer of unparalleled versatility, Simmons has written for all genres and transitioned from TV series to longform movies (A Rare Breed, Miracle Landing), wrote the early drafts of The Last Samurai (starring Tom Cruise), and currently has multiple feature films in development.

More than just telling his own story, this quick-tempo conversation with Garner Simmons reveals the hard truth about working with Hollywood agents, delivers valuable career advice, and is truly a lesson in finding “the keys to success in show business”!