Bob & Suzanne discuss Bob’s first real movie studio gig and how he talked his way past the guards at Paramount Studios to get an “impossible” interview.

Suzanne rightfully accuses him of unmitigated chutzpah, and we learn what life was like on one of the most iconic and challenging shows on network television, the original Mission: Impossible. Bob talks about the cast changes on that show, shares his memories of Peter Graves, Martin Landau, and show creator Bruce Geller.

We hear of the eccentricities of his first flamboyant boss, and gain an understanding of just what “paying your dues” in show business is all about.  Bob and Suzanne discuss life on the set of Paramount’s major shows, like Mannix and Bonanza, the studio-network politics, and various personal rivalries. 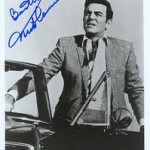 Bob name drops and reveals for the first time his travels with a talented writer-producer who just happened to have killed his wife with a pair of scissors.  Seriously!